You Can't Handle The Youth 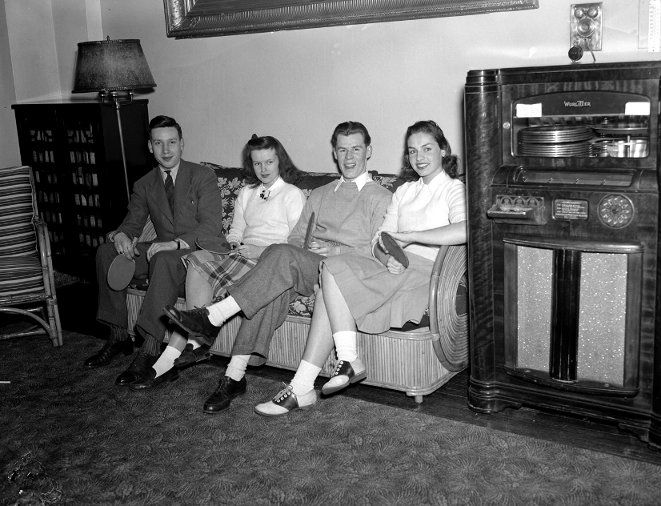 Back in the 40s the younger generation were just that, a younger form of their parents. The prepubescent's of that time rarely back chatted or used foul language. Disrespect towards those older than you was not tolerated and family values were grounded into children from a very early age. The family unit was treated as just that, a unit. You were as one, each of your actions would impact on those closest to you, so consideration to your relatives was a big factor in keeping you in good favour. Much time would be spent together. Dinner times would be a family gathering of young and old, all bought together each night to enjoy a home made meal and conversation. Often members of the extended family would live in the same street, meaning any issues that arose would be dealt with by those closest and very much kept in house. The head of the house, often Mother, wouldn't want personal struggles shared amongst the local town folk so internal problems were dealt with within the confines of the family circle. Bringing shame on ones' family was something to be avoided at all costs.

In this era the term 'teenager' didn't really exist. There were babies, children, youths and adults. To be classed as an adult was less about reaching a milestone birthday such as 18 or 21 and more aligned to getting married. Marriage pushed you straight from youth to adulthood no matter your age.
In the present time there is a clear distinction between teens and most adults. Fashion plays a massive part in today's youth as it gives them a feel of identity and presence. Just what youngsters of the past wanted to avoid. They dressed as smaller clones of their parents, often wearing the same garments made by the same sewing machine at home from the same pattern, just in a smaller size. The younger persons in the family were a compact representation of the adults that bought them up and were expected to act as so.
At this time, money was in short supply and any spare cash would be put in the collective 'pot' for family essential's. Clothing didn't come near the top of the list so was often overlooked. Putting food on the table was much more important than attire.
The only day of the week that dressing well really counted was a Sunday, when all the best finery would be worn for the family trip to church. Making a good impression on a Sunday morning was vital. Again this would be a whole family affair. Mum, Dad, children and Grandparents all together to give thanks to God. I don't know about you, but I can't even get my kids out of bed on a Sunday before noon let alone get them to sit in a drafty building for a couple of hours.

The fifties saw the birth of the term 'teenager'. This era saw an array of influences that helped to mould these teens into the rebellious image these years are famous for. Movies, television, rock music, magazines and fashion all helped to create these new pre- adults. Not only were they now starting to break away for the pressures that came with the war, they also strived to be different and independent from their parents. Trying to show that Mum and Dad's way wasn't always the best way.
Also at this time consumer goods had become readily available and the younger folk, who now had a disposable income thanks to the boom in working opportunities, need little encouragement to spend their new wealth on goods and services. Expenditure included clothing, cafes, haircuts and music. The teens embraced this lifestyle and made it their culture. Teen domination if you will. These pre-adolescents even bought cars or scooters, giving them more freedom than the previous youths. Others even went on holiday without a chaperone, home and abroad.
All these new found privileges, as great as they were, pushed the gap between the teen and the parent further apart than it had ever been before. This is still true in the present time. No longer do the next generation want to be just like Mum and Dad, they want to be financially and intellectually independent. This isn't necessarily a bad thing, in fact I would say its a positive thing and indeed all part of growing up.
However, do they have to be so lazy, frustrating and argumentative whilst taking the journey to independence? I love them really. :-)
Fashion during this time really took off. You would find group gatherings in accordance to their style preference. Lifestyles included Teddy boys and greasers or rockers.  Then you had the more clean cut and tidy Mods. 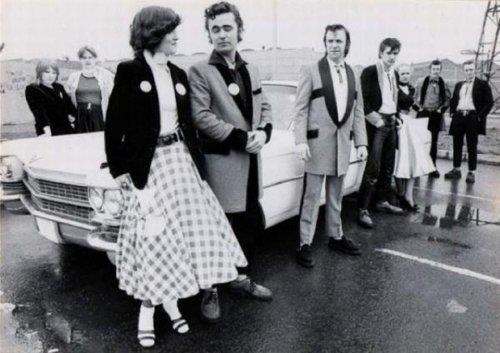 Being a teddy boy or girl wasn't for the cheap skates. Dressing in tailored suits was a costly business, but these guys and girls liked to look smart, and were happy to foot the bill. The Edwardian period was the inspiration behind the attire and, as we all know, rock and roll music and jazz heavily influenced the teddy boy movement. Long, fitted jackets often referred to as drapes and drainpipe trousers were all the rage, along with a good pair of creepers. The hair had to be slicked back with a floppy quiff on top and combed into a DA (Ducks Arse) at the rear. Consistent combing was an integral part of this fashion, so carrying a comb at all times was essential. Combing on the go became a skill of it's own.
The girls wore drape jackets with a pencil skirt or rolled up jeans. Flat shoes and cameo broaches, along with a clutch purse to accessorise, were all finished off with a short curled hair style such as that favoured by actress Elizabeth Taylor. As time moved on, the teddy girl style became more Americanised and they leaned more towards large circle skirts with big petticoats, tight tees and 3/4 length tight pants, (or trousers as we know them). To complete they would have a sleek, high pony tail. This image became what we now call Rockabilly. 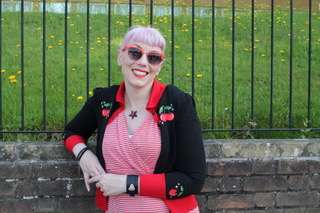 This rockabilly period I have to say, is one of my personal favourites and I will often be seen wearing Rockabilly clothing perticully in the warm weather. For me its the ultimate fashion and comfort blend allowing me to express myself, without having too much 'on show' or having to constantly re-adjust my garments.
In this photo I was stopped by a total stranger whilst I was parking my car. I ended up having a mini photo shoot right there in the local carpark. A random act that was a lot of fun. As it happened this chance meeting would lead onto more photographic work for me. who knew parking a car could create such an opportunity.